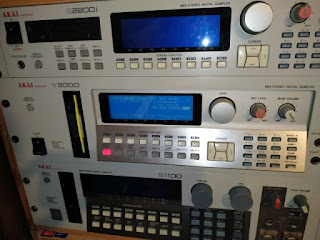 Music is always a feeling, and things which feel good we like. Akais have ever been a dinosaur of another time and today they seem a bit nostalgic. Creating and storing sampling librarys are a lot of work and takes time. But especially in times like now for me it is more important to get an indivudal sound, cause never else than today was so cheap and easy producing music. These old Akais can give your production a special flavour.
What I really like on the S3000 is the build quality, the XLR Outs and that it sound equal to a MPC30000.  Hihats can shine and sound really amazing fired out of an S3000. Some users describe the Akai S3000 sounds like studio standard chrystal clear, but there are some differences in the higher frequencies. For me it’s like a little saturation and high freq. cut. A drum mix from a S3000 sounds even little compressed. The sharpnes of the hihats can be enorm reduced, kicks and snares have the right punch. I enjoy using the S3000 with external gear like my Alesis 3630 compressor, Soundcraft eq + Ghost preamp and some outboard reverbs from Alesis and Lexicon. It is a very easy routing with a hardware sampler and the worklow is also fast and more creative for me than ITB. It is a totally different workflow producing and aranging a track what makes the main difference. Indeed the S3000 original (non XL) sound is as thick as the MPC3000, because it has he same converter.
For drum sequencing I am using my MPC Renessaince which is a great combination for hardware samplers. The timing is absolutly stable and the swing got the typical AKAI mojo. For me the best mix of a modern DAW and pad programming.

The internal data processing of the S3000 takes place with 28 bits. As a sampling rate 44.1 and 22.05 kHz are available, the lower rate is initially intended for corresponding recording material below 10 kHz. However, also to save space, because at 44.1 kHz, there are just 11.14 seconds recording capacity for stereo samples and 22.05 at mono. The cause of the shortage: The factory only 2 MB RAM are installed, which can be expanded with up to a maximum of 32 MB. 3 minutes of stereo sampling in and almost 12 minutes if it is 22.05 kHz and mono. Which explains why the AKAI samplers were used in their heyday for dance and techno productions to manage longer vocal recordings than samples. With the resample option you can also transform your existing data into other sampling rates. The S3000 manages up to 255 individual samples. For the sound shaping itself is a Synthesizer Engine ready, whose parameter set is manageable, but which serves well for most purposes. In particular, fine-tuning of instruments of all kinds can be done with it, for which there is a digital 12 dB / octave filter that can even a little resonance. It continues with two envelope generators, one regularly used for volume and the other for filters. The display is alpha-numeric and graphical, which makes the often somewhat laborious setting in sample editing comfortable.

Usefull upgrages are new EL foile, or a LED display.
For storing your samples a usb /sd floppy emulator makes sense. I only updated my s3000 with a SCSI card for using my Iomega zip. Also Interesting if you got a SCSI CD Rom, loading some Multisample libraries in the Akai.

The OS v2.0 upgrade primarily focuses on resolving issues caused by Akai’s previously poor non-compliant implementation of the SCSI protocol in its system code. This is especially important for users out there that wish to use their S3000 with MESA II as well as Recycle 2.0.

You can upgrade to OS v2.0 via system boot floppy or image from card reader / zip and with a new system Rom available from ebay.

You can max the ram with 32MB. These days its very hard to find some single boards. If you are lucky you can get some mutec dmc-08 boards with 8MB. While you are using the S3000 for some simple drums its nor important to maximize the ram. 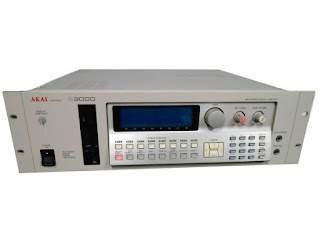 Parts:
The internals of the StarTech.com unit is an Addonics AD44MIDECF. StarTech.com adds a slot for the card and a metal housing.

The only CF drive that have been able to get to work is a Pretec 16 GB 233x Series Compact Flash drive. I was able to find someone selling one on eBay. Other than eBay, they seem to be sold out everywhere.
Per Muser on GearSlutz, the reason why this CF card works is the following:
The Akai will likely want to see this kind of speed, as its hard disk formatting specification mirrors that of a sample CD.
I also had to cobble together a custom Female Large 4-pin Molex to Female Small 4-pin Molex, soldering together parts from two other Molex cables I had.

Collecting and sharing informations is a lot of work. To keep this blog alive we would thank you for a donation!